With a population of 500,000, the County of Sonoma and its 9 cities join 23 nations including Argentina, Australia, Bangladesh, Japan, and the entire European Union, along with 139 cities across the U.S., including Albuquerque, Boston, Chicago, Miami, Minneapolis, New York, and San Francisco, and over 1,900 governments worldwide in declaring a climate emergency. [Source: http://bit.ly/ce-governments]

In recent years, residents of Sonoma County have endured heat waves, devastating wildfires, “atmospheric river” rainfall events, and punishing droughts whose frequency and intensity have increased due to levels of CO2 and other heat-trapping greenhouse gases that far exceed those seen at any time within the last 800,000 years.

Climate Emergency Resolutions acknowledge the urgency of the climate crisis and commit jurisdictions to bold, equitable climate action through reducing current emissions to zero and “drawing down” existing atmospheric carbon dioxide, while concurrently preparing for the inevitable consequences of a rapidly warming planet. Several of the cities have set a 2030 target date for carbon neutrality, far in advance of the State’s goal of “…carbon neutrality as soon as possible and no later than 2045,” as stated in Governor Jerry Brown’s 2018 Executive Order #B-55-18.

In passing a Climate Emergency Resolution at its September 17, 2019 meeting, County Supervisor Lynda Hopkins remarked, “We have to stop acting like business as usual is cutting it, because it’s not. We need a transformation. We need a dramatic change. We really have ten years to dramatically transform ourselves into a post-carbon economy… It is critical that we pass a Climate Emergency Resolution and that we follow it up with meaningful and substantive change and that we act like our planet is on fire, because it is.”

The County of Sonoma is unique in California in having a Regional Climate Protection Authority (RCPA) — a joint powers authority, or JPA, tasked with coordinating climate protection efforts among the County’s nine cities and multiple agencies. In recognition of strong community support for bold climate action, at its March 8, 2021 meeting, the RCPA Board approved a Sonoma Climate Mobilization Strategy that establishes a goal of “carbon neutrality by 2030,” establishing the region as a global climate action leader.

Passage of the Climate Emergency Resolutions resulted from elected leaders responding to the voices of a concerned and engaged community.

All ten of the Climate Emergency Resolutions in Sonoma County passed unanimously. 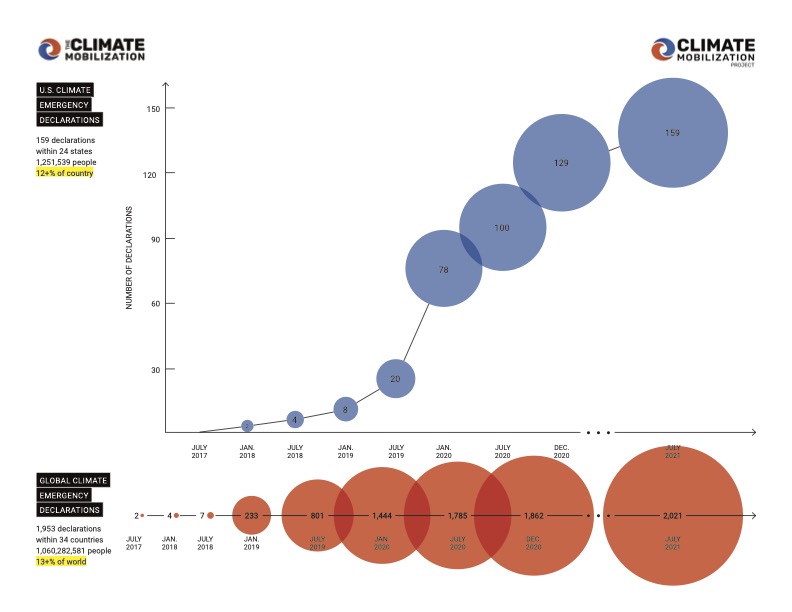