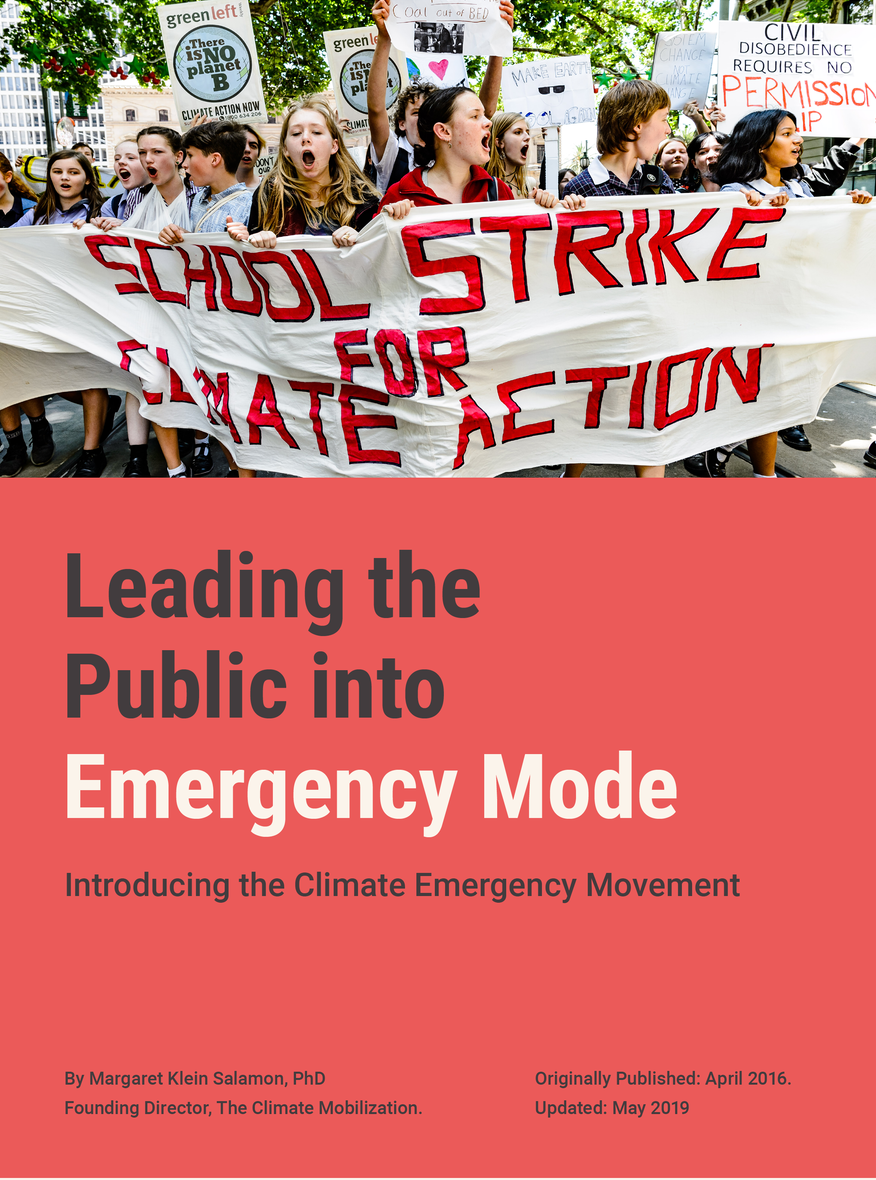 This paper, originally published in April, 2016, under the title, Leading the Public into Emergency Mode: A New Strategy for the Climate Movement introduced a new paradigm for climate action: emergency mode. Margaret Klein Salamon, PhD argued that, in order to protect humanity and the living world, the climate movement must tell the truth about the climate emergency, and act as though that truth is real — employing emergency communications, militant tactics, and demanding an emergency mobilization from the government and all society, as the policy response.

In the three years since publication, Margaret’s recommendations have been largely adopted by several new climate groups — Extinction Rebellion, School Strikers, Sunrise Movement, and more — leading to tremendous breakthroughs. This paper, updated May 2019, combines the theoretical discussion of emergency mode with an overview of the young but fierce Climate Emergency Movement.

No one has been more inspiringly clear-eyed about the climate emergency or what it demands than Margaret Klein Salamon. Here, she is just as clear-eyed, and just as inspiring, laying out the path forward—and how to bring everyone along that path, out of pluralistic ignorance and into mobilization.

You know how you encounter an idea, and that idea becomes immediately obvious to you, and you can't quite believe it hasn't been seen before? This essay is like that. Margaret Klein Salamon argues brilliantly, and completely correctly, that everyone will need to shift into "emergency mode" in order to create a politics that will address climate destruction with the scale and speed it requires. Using her training as a clinical psychologist, Klein Salamon guides us through the fear and helplessness we feel when we confront the climate emergency, transforming those feelings into a state of psychological flow and a sense of belonging and purpose. Her work is necessary reading not just for people already in the climate movement, but for anyone who worries about a livable future.

Salamon’s work continues to lead the conversation — and now the ACTION — defining what must happen to rapidly accelerate the decarbonization of the global economy. The Climate Emergency Movement is creating a “hockey stick” trajectory of rising mobilization and momentum, something that is much needed given the ever-rising threat of human-caused climate change. As Salamon, says our house is on fire and we must act to put out the fire now.

Since we didn't heed the warnings of scientists over the last three decades, "climate change" has morphed into the "climate crisis" we see all around us. Margaret Klein Salamon is an invaluable guide to this new moment, offering an understanding of how fast and decisively we need to move. This action won't be easy--but it will be far easier than the alternative, and along the way there are chances to build a society both just and lasting. So please pay attention!

Margaret Klein Salamon's essay makes clear the inadequacy of a business-as-usual approach to averting climate disaster and lays out a powerful path to action – one that gives us a fighting chance to restoring a safe climate and saving our species.

Drawing from historical examples and theoretical concepts, Margaret shows us that in spite of the enormity of the challenge, we are in fact not powerless, provided that we collectively take action - concerted, focused, timely, deliberate action.

In laying out a path forward that reflects both the urgency of the crisis as well as a profound understanding of social change, she has offered us an antidote to the despair that so often characterizes our responses to the climate emergency. Margaret's vision will inspire thoughtful, powerful action in our communities- our best hope in restoring a safe climate and averting a dark future.

This is one of the most hopeful documents I've read in recent years.

As our growth strategy manager Meghann brings more than 20 years of nonprofit management and fundraising experience to The Climate Mobilization. For over a decade Meghann has worked as a nonprofit consultant helping organizations expand their capacity, secure revenue, develop successful strategies, and effectively evaluate their programs enabling them to create greater positive change in the world. She has also worked as an executive director, designed and facilitated international service learning experiences, and taught university courses in fundraising and nonprofit management. Meghann earned a MPA in Nonprofit Management and Comparative and International Affairs from The School of Public and Environmental Affairs at Indiana University, in Bloomington, IN and a BA in Art History and American Studies from Tufts University in Boston, MA.